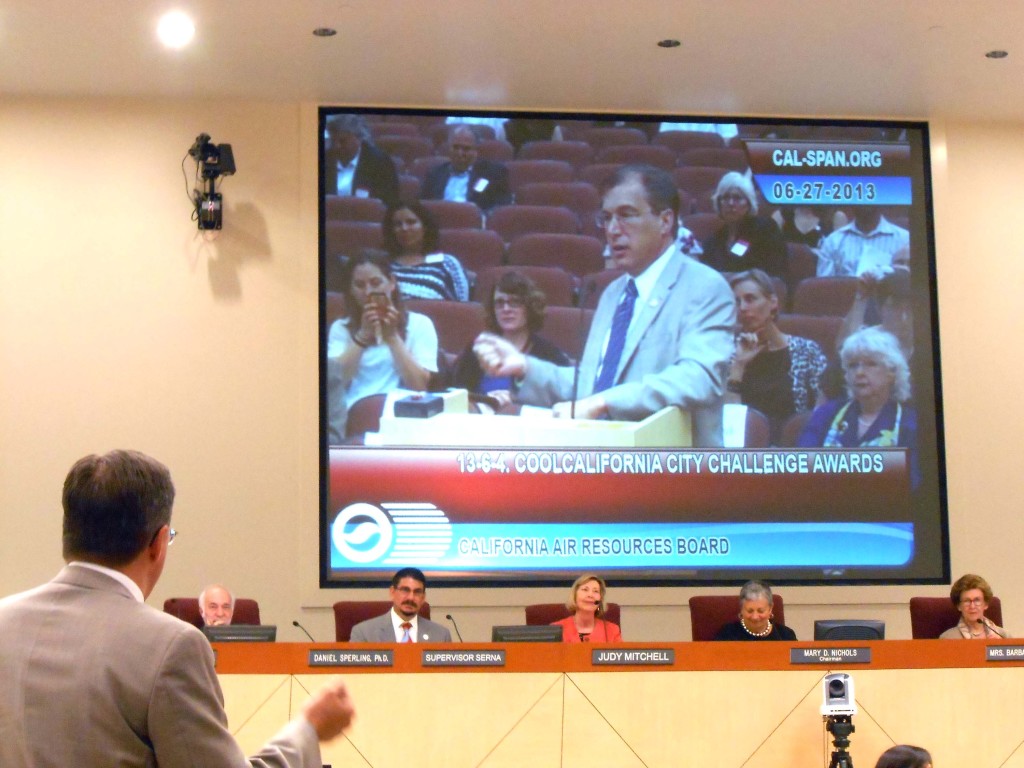 Three cities were honored Thursday at an award ceremony before the California Air Resources Board, wrapping up a yearlong CoolCalifornia Challenge in which thousands of households in cities across the state competed for the biggest citywide carbon footprint reduction.

Known for its longtime commitment to environmental sustainability, the city of Davis was crowned the state’s “Coolest California City” by the Air Resources Board out of eight cities that began the competition. Chula Vista and Tracy, which came in second and third, respectively, were named “Cool California Cities.” All eight participating cities used novel and creative approaches to engage households to take simple everyday actions to reduce their carbon footprint, and accurately measure the combined greenhouse gas reductions for each municipality.

ARB Chairman Mary D. Nichols presented the mayors or representatives of all three finalist cities with a special award at the board meeting.

“Engaging households and civic groups is an essential part of the state’s ability to achieve the long-term climate goals of reducing greenhouse gas emissions and moving us away from our dependence on fossil fuels,”  Nichols said. “The CoolCalifornia Challenge helps us learn how cities can motivate individuals and households to voluntarily reduce their carbon footprint, and do it in a way that can be entertaining, fun and fulfilling.”

“The CoolCalifornia Challenge helps us learn how cities can motivate individuals and households to voluntarily reduce their carbon footprint, and do it in a way that can be entertaining, fun and fulfilling.”

In all, the ARB-sponsored CoolCalifornia Challenge enrolled close to 3,000 participants in the cities of Davis, Chula Vista, Tracy, Sacramento, San Jose, Citrus Heights, Pleasanton and Pittsburg. Chula Vista had the most people involved, with nearly 700 households participating.

Together, the 1,000 most engaged households used 50 percent less energy than similar households and cut their energy use another 7 percent during the competition, equivalent to more than 220 metric tons of greenhouse gas emissions.

Like all of the cities participating in the first such year-long challenge, Davis successfully engaged hundreds of residents to track and reduce their energy use and miles driven — to collectively reduce the city’s carbon footprint. Davis has set a goal to engage 75 percent of its households in voluntary greenhouse gas reduction activities by 2015. Nearly 450 Davis households signed up for the contest. The city came out on top by earning the most points. While individuals and teams alike helped rack up the city’s overall points, two Davis Community Church teams, among the city’s top teams, contributed a combined 14 percent of the total points.

“Climate Change will be defeated by a constellation of individual actions,” Davis Mayor Joe Krovoza said. “As the government closest to citizens, cities must play an active role in spurring these actions. The CoolCalifornia Challenge brought Davis together like never before, and has set the stage for our continuing work to have 75 percent of all households engage in aggressive carbon reduction actions — from efficiency, to renewables, to active and electric-drive transportation. In partnership with the state, Davis will reach its goal of citywide carbon neutrality by 2050.”

Participants earned points for reducing their household energy use and tailpipe emissions — by bicycling instead of driving or hanging laundry to dry instead of using a dryer, for example. They also earned bonus points for beating their own personal benchmarks each month. Cities engaged households in the competition with city-sponsored block parties, at weekly farmers’ markets and through special events like the Cool Davis festival, which spurred ideas for reducing household greenhouse gas emissions with information, entertainment and family activities.

A CoolCalifornia.org website, developed through a partnership of ARB, nonprofit Next 10 and UC Berkeley, provided online tools to support the voluntary efforts by local governments and households. Individuals tracked their driving habits and home energy use with easy-to-use online software developed by UC Berkeley for the site. Points earned counted toward a city’s total, and also earned participants raffle tickets toward local prizes.

Gearing up for round 2

While the winning city gains bragging rights and recognition, ARB takes away valuable information about how to get individuals to voluntarily make changes to curb their carbon footprints and foster sustainability and green economic development. Because voluntary actions are included as elements in California’s climate plan, ARB has developed a variety of tools and resources to support these non-regulatory efforts.

The Challenge is part of an ARB-funded research project by the Renewable and Appropriate Energy Lab at UC Berkeley. The study will help inform future efforts to promote and quantify carbon footprint reductions and help establish best practices for citizen engagement.

Challenge participants will be invited to again celebrate their accomplishments at an event set for Sept. 5 on the west steps of the State Capitol. Organizers plan to kick off a second CoolCalifornia Challenge at the celebration.