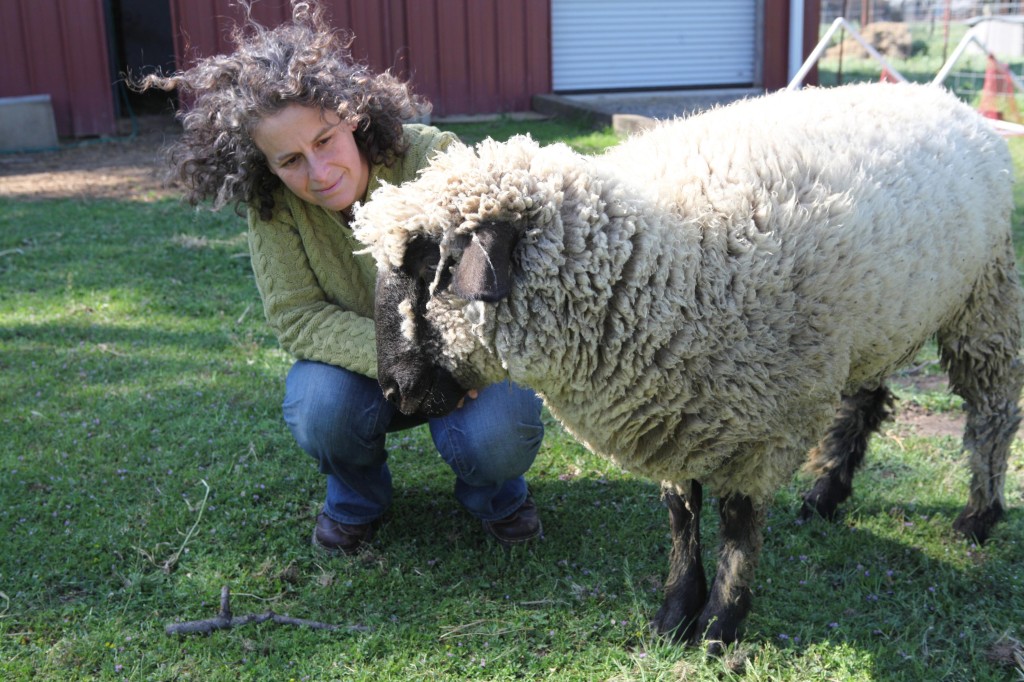 Robyn Waxman is, without a doubt, the nicest revolutionary you’ll ever meet. Charming and articulate, she could be a professor, mom or farmer – in fact, she’s all three. Being nice is part of her plan for revolution. “FARM was my graduate thesis,” she says “which was a way to engage these very polite Millennials in revolution.”

“FARM” is the Future Action Reclamation Mob, “an alternative form of non-violent protest, reclaiming public space to build community, providing services for under served and transient populations and/or rehabilitating toxic land.” FARM is also a collection of physical locations where people can help grow food for themselves and their community. And FARM is, in very large part, why Cool Davis named Waxman a 2013 Eco-Hero.

The first FARM location, in San Francisco, was the end product of Waxman’s graduate thesis – and the beginning of a real movement. On a 66’ strip of toxic land where Waxman and a group of volunteers began growing food as both form of social protest and a bioremediation project. The project proved so exciting to the California College of the Arts community that Waxman was named commencement speaker for the year. The San Francisco FARM is still operating, being passed from one class of farmers to the next.

Returning to Davis after graduation, the 2,000 square feet of lawn in front of her K Street home proved irresistible to Waxman. FARM Davis was born on Halloween 2009, transformed by a group of farmers who came dressed as their favorite cover crop. Volunteers? “They’re not volunteers,” says Waxman, “they’re farmers. There’s no one to tell them what to do. They have to decide.” The only rule? They give away half of what they grow, in the case of FARM Davis to the residents of the Cesar Chavez housing complex.

How was it, having a farm as your front yard? “It was great. We wanted to reclaim the front yard as public space,” says Waxman. “People were in and out all the time.”

While the K Street FARM is still operating, Waxman couldn’t resist the lure of a larger space – FARM 2.6, on the outskirts of Davis, where there’s room for rescued bummer lambs, a fiber garden and a wealth of community activities. Meanwhile, there’s a new FARM, the smallest yet, on Valdora in South Davis.

Waxman doesn’t confine her activities to her own education or home: she incorporates agriculture into her Design & Illustration courses at Sac City College, in what she calls the “Home Ec of Graphic Design.” She also manages City Farm on campus where she assists other instructors in planning to “use this dirt to understand your discipline better.” Last year, City Farm grew indigo, which a Chemistry class processed into dye while a Design class produced a book about the project. This year, she hopes to add an African American History class to provide context for the project.

Waxman is slightly astonished at being named an Eco Hero for “merely” starting a series of public farms and piloting coursework incorporating agriculture into ordinary life.

Waxman is slightly astonished at being named an Eco Hero for “merely” starting a series of public farms and piloting coursework incorporating agriculture into ordinary life. When asked, she agrees that she’s a vegetarian, composts, and grows her own food. “I’m going to make my own clothes, too” she volunteers. “I’ve learned to spin, and we’re growing a dye garden, so I just need to learn to knit.”

Ultimately, Waxman says of her initial work with Millennials and FARM,  “It was really because I wanted them to be able to teach Sophia” says Waxman, referring to her eleven year old daughter. “It’s pretty much all always about Sophia.”