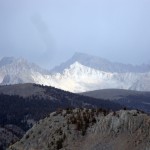 John Muir turns 175 on April 21, the day before the 43rd Earth Day celebration. Both milestones deserve contemplation, so Cool Davis invites the community to consider “John Muir: the Writer, Scientist and Public Figure” as noted Davis author Kim Stanley Robinson presents him. Robinson will accompany his talk with photographs chosen from his years of backpacking trips in the Sierra Nevada Mountains.

“As a Sierra backpacker, I have often had reason to think of Muir and thank him for his amazing accomplishments in helping to preserve the high Sierra as wilderness for future generations,” Robinson says. “Also, I went to John Muir College at UC San Diego, and for Muir College’s 40th anniversary I put together a talk.”

Recently, Robinson spoke at UC Davis for the John Muir Institute, and now, at the request of Cool Davis, he repeats his lecture for the Davis community. In his talk, Robinson shares Muir’s personal story and examines how the noted naturalist translated a writing career into astonishing feats of public policy.

“Climate change can seem like a remote problem for our leaders, but the fact is that it’s already impacting real people, animals and beloved places.” Kim Stanley Robinson

While Muir confronted issues from another era, it’s clear where he would stand on the key issue of our time: climate change. As stated on the Earth Day website, “Climate change can seem like a remote problem for our leaders, but the fact is that it’s already impacting real people, animals and beloved places,” like the Sierra that both Muir and Robinson know so well.

“I’ve been tracking the Sierra glaciers since the 1970s with visits and photographs, and they are going away,” Robinson says. “They are almost certain to go entirely away, and this is only one highly visible part of the damage that will occur to the high Sierra, and to all of California — since the Sierra snowpack is California’s annually renewed water reservoir — if climate change is too extreme and the average temperature of the Earth rises too high.”

Of necessity, Earth Day has grown up.

” ‘The Face of Climate Change,’ the 2013 theme, will not only personalize and make real the massive challenge that climate change presents, it will unite the myriad Earth Day events around the world — involving more than 1 billion people in 192 countries — into one call to action at a critical time,” said Franklin Russell, director of Earth Day at Earth Day Network.

But what can we do?

Robinson urges, “We need to take immediate action at every level, and Cool Davis is a part of that effort, because it teaches us things we can do here and now at home.”

Beginning in 2014, the One Cool City Campaign to reduce Davis’ collective greenhouse gas emissions in transportation, home energy use and consumption, including Davis’ ”food print,” will reach out to 75 percent of Davis households, neighborhood by neighborhood.

Inspiration often triggers awareness followed by action. Cool Davis designed its Eco Hero awards to inspire the community by highlighting the actions of ordinary citizens who model how to incorporate sustainable practices into their civic and everyday lives and implement new ways to live with a lower carbon footprint.

Past Eco Hero Larry Fisher said recently, “I was really honored to receive the Eco Hero award in 2010. Suddenly, people knew who I was and what I do specifically in recycling. Next thing I knew, I received an appointment to the Yolo County Landfill’s Waste Advisory Committee.”

In addition to the 2013 Eco Hero Awards for individuals, Davis Mayor Pro Tem Dan Wolk will present the Climate Solution Awards for businesses and organizations that model ways to reduce their environmental impact, and lead others toward climate stabilization. Finally, the Cool Davis awards recognize the contributions of dedicated volunteers.

During the slide show, Nature’s Theater creators Lyndsay Dawkins and Jeff Falyn will guide children ages 4-10 on an adventure outing. The magic begins when they escort the kids outside. A character meets them, sets up a story and walks with the kids as the story progresses, offering playful activities, characters and lessons about nature.

If the weather is questionable, indoor nature craft adventures may be substituted. Pre-register for child care for children ages 2-3 at www.cooldavismuir.eventbrite.com.

Muir’s birthday party ends with a reception including birthday cake and party favors worth keeping. Guests who bring their own snack container or walk, bike or ride the bus to the party earn a chance to win a cool prize.

“Birthday gifts” to further Cool Davis’ environmental work are appreciated. The suggested donation is $5 to $10 per person.