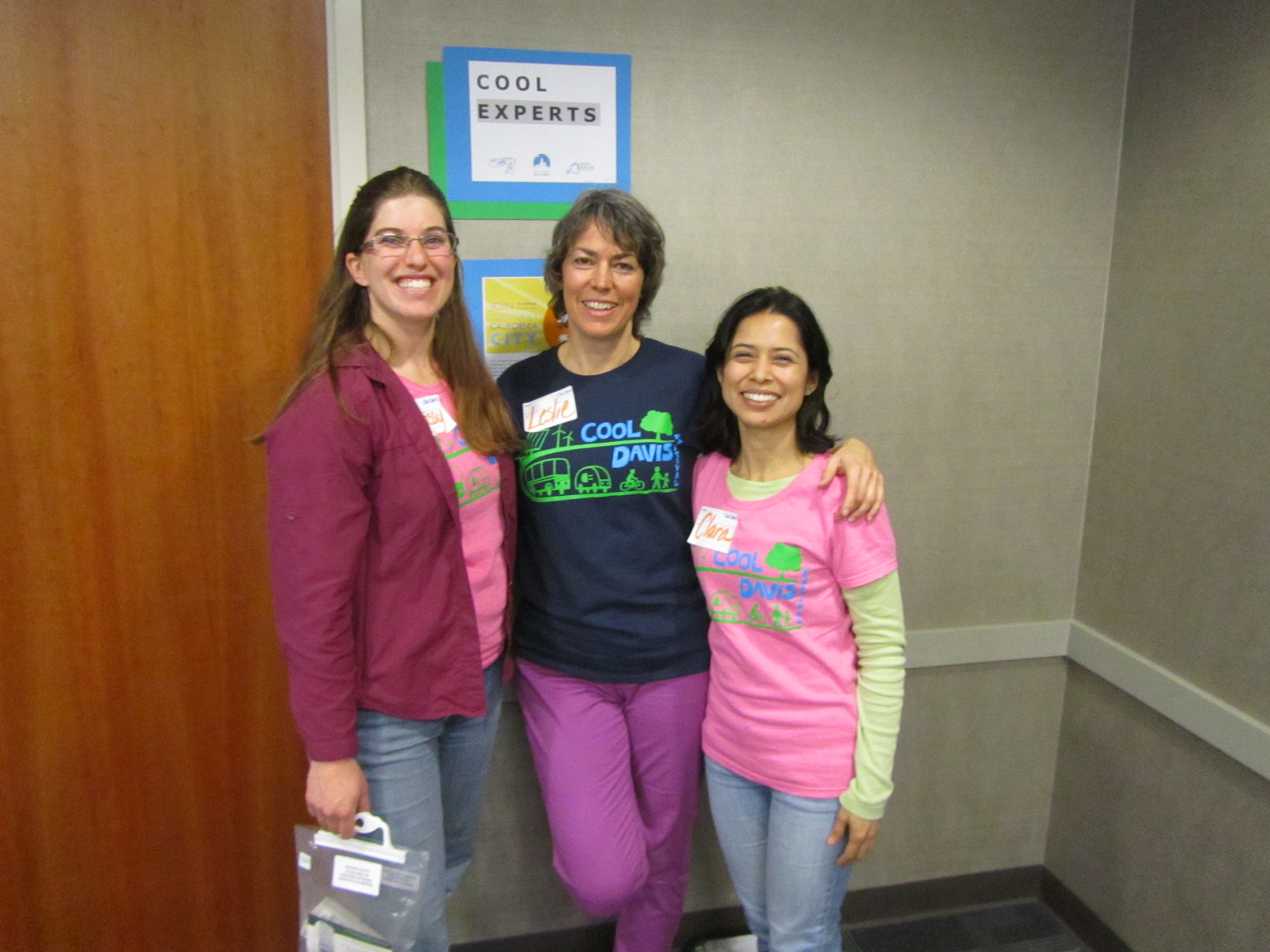 Cool Davis thanks all those who attended the recent Cool Home Workshop held at the Davis Library February 9, 2013.

Attracted by cool eats, cool prizes, and cool opportunities, 75 participants including 12 current and 13 new from the Cool California Challenge attended the event made possible by 20 fantastic volunteers from the UCD Regents Scholar Society, Cool Davis, and independent members of the community.

Through surveys and the Cool Solutions Checklist, half of participants reported already reducing their freeway speeds to 65mpg and the intention to drive an electric or 30mpg car in the future. Nearly half reported they already dry their clothes on a line or rack and a quarter plan to do so in the future.

Like the event itself — which achieved near zero waste, created compostable materials not trash, and utilized electric vehicle transportation and reusable materials and signage — one the main benefits of reducing home energy and car usage, according to one participant, is a “warm fuzzy feeling.” Other participants mentioned clean living, saving money, reducing wear and tear on cars and tires, fuel savings, more exercise, less pollution, hope, happiness, setting a good example for kids, and living more responsibly as benefits.

Davisites share many of the same barriers to reducing carbon footprint. According to survey results, the most common are a busy lifestyle, money, jobs outside Davis, laziness, tight schedules, and getting around at night or in bad weather. Barriers less often reported at the event but still of vital concern to our community were renting and not controlling appliance purchases, maintaining standard of living, poor insulation, kids not turning off lights, and lack of alternatives for trips more than five miles away. “Long term habits are hard to change” wrote one participant.

La Gotita Bonita (that big blue water drop) was on hand to liven up the festivities, Chrissy Backman, with Davis Energy Group and a Cool Davis volunteer, spoke about her experiences using a watt meter (available for borrowing through the library), and Chris Jones, with the Cool Climate Network, spoke about the successes of the Cool California Challenge.

Lynne Nittler and Kendall Essex, Cool Davis volunteers, put together a scrumptious spread from the Davis Food Co-op and Good Humus CSA with fully reusable serving dishes and composting. The winner of our kids drawing contest won $10 in Davis Dollars and an LED clip-on flashlight. Clothes drying racks and succulents were popular prizes as well as 22-year LED lightbulbs, which participants took home to help fulfill pledges made at the event.

Many took the opportunity to sign up for the Cool California Challenge, a race to be named the Coolest City in California. Davis is currently in first place but Chula Vista could still catch up!It’s not too late to join or log points as the race has been extended through the end of April! Go to coolcalifornia.org/community-challenge to sign up or log data. Please go to CoolDavis.org for information about other Cool Davis events and future Cool Home Workshops. Cool Davis thanks volunteers and participants for helping to make this a fun and successful event!