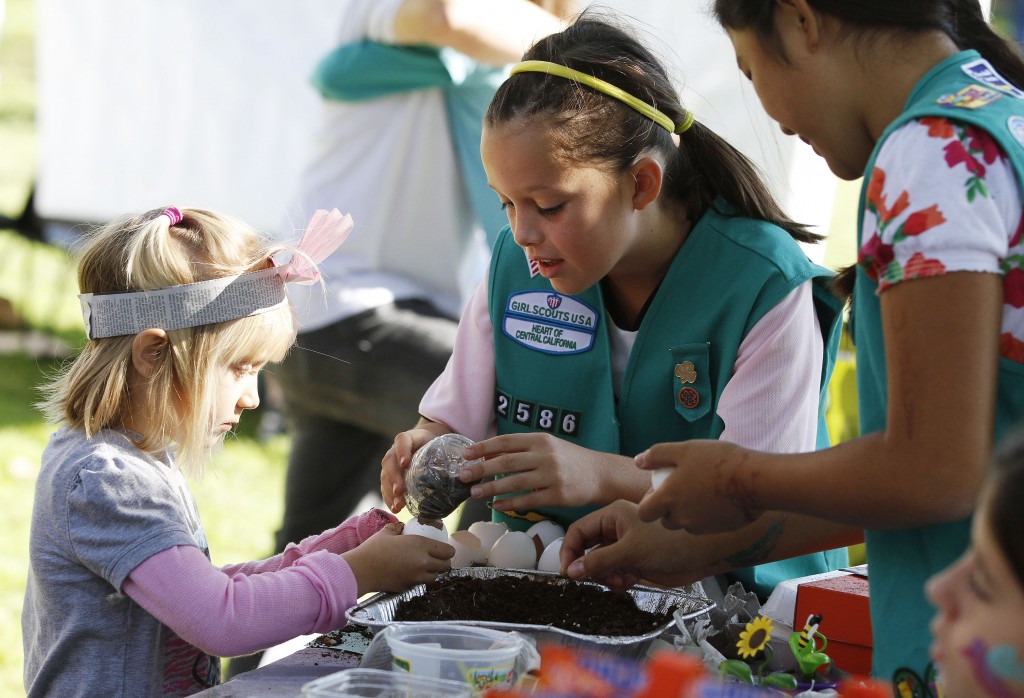 This article by Cory Golden is cross-posted from the Davis Enterprise, one of the Cool Davis’ Festival sponsors.

On Saturday at the Cool Davis Festival — the Central Park pep rally for all things green — Doyle did his bit to fight back against climate change with his green grenade.

Or maybe it’s a green egg.

Or maybe it’s just a so-far nameless organizer for all those plastic bags that, as Doyle put it, “You can’t stop from coming into your life.”

Doyle and other festival volunteers and exhibitors said that they hoped that once the taiko drumming and guitar strumming ended Saturday, visitors would find a bit of inspiration from tables touting solar power, electric bicycles or how a change in diet can benefit the environment.

“Low-impact living is using less and having a great quality of life,” said Doyle, an oceanographer by training who serves at UC Davis’ sustainability manager.

There was also a Cool Davis checklist for visitors with items like reducing highway speed, replacing turf with drought-tolerant plants, buying items with less packaging.

Making such a list is a “Goldilocks challenge,” Doyle said.

“You don’t want to make it too easy, where people will only say, ‘I’m already doing that,’ but you want (the items) to be significant,” he explained. “You don’t want people to be complacent. You want them to stretch, but you don’t want it to be too difficult.”

One table over, Alea German and Patti Heath of the Davis Energy Group were taking questions about changes residents could make beyond screwing in incandescent bulbs, toting canvas grocery bags, pedaling a bike or driving a hybrid car.

Some home upgrades are admittedly less inspiring or flashy.

“It’s the same reason people put (a photovoltaic system) on their house before checking their ducts,” German said.

Said Heath, “There’s a lot of low-hanging fruit. You can put weatherstripping around your doors. You can install a programmable thermostat. You don’t have to go whole hog and replace an AC unit — you can do simple things to get started.”

It’s changing your furnace filter twice a year (“If you have dogs, you’ll want to change it much more often,” Heath added).

The pair surveyed the checklist, nodding along. Heath paused at “teach your kids to turn off their lights.”

“Not just ‘teach your kids,’” she said. “Teach your husband.”

Over at the Unitarian Universalist Church of Davis’ booth explaining its Green Sanctuary effort, Eldridge Moores, a UCD professor emeritus of geology, gamely worked his way down the checklist, too.

Moores is the sort who will spend his free time making tables of per capita energy consumption or consult a campus expert before settling on which low-flow toilet to buy.

So while he doesn’t check off everything on the list, he and his wife, Judy, the co-chair of the congregation’s sustainability program, come awfully close.

Rather than setting the thermostat at 78 degrees in the summer, 70 in the winter, the couple opts for 83 and 60 (Eldridge jokes that when practicing the piano he imagines Mozart warming his fingers in a bowl of water before playing).

Of Cool Davis, Moores said, “What you want to get across is that regardless of the green-ness of the way they live their lives, there’s always something more they can do.”