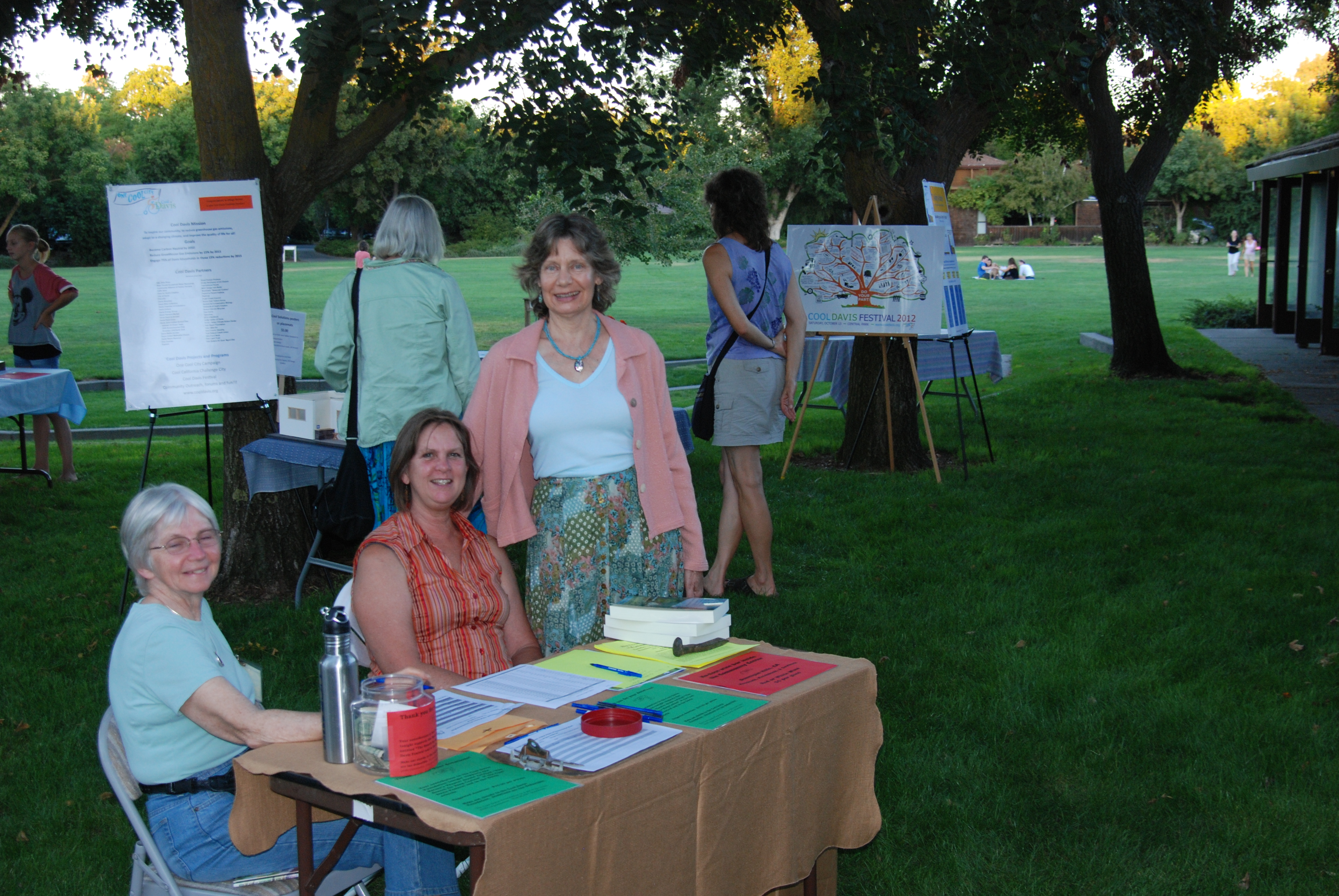 Village Homes in Davis is a passive solar community built in the 1970’s founded on the principals of sustainability.This August, Village Homeowners’ Association Board formalized the friendly relationship Village Homes and Cool Davis  have already enjoyed for several years and became an official partner. The alliance is an easy fit because Village Homes was deliberately designed for low carbon living and energy conservation as well as the intention to develop a sense of community.

The Board members found the interview questions to be quite worthwhile as a way to review where Village Homes is now, and to  consider where they want to go.

Village Homes is fortunate; it was carefully conceived from the beginning as a planned passive solar community. Even the basic layout of the development leads to energy efficiency. The streets run east-west, so the houses all face north-south, taking full advantage of the sun’s energy. The streets are narrow to reduce thermal mass that absorbs heat in the summer, and the street trees form a canopy arching over the narrow streets to shade them, resulting in a noticeably cooler microclimate in summer. While the streets dead-end in cul-de-sacs making car traffic awkward, Village Homes is easily traveled by bike paths. The natural drainage in swales and ponds allows rain run-off to percolate deeply through the soil instead of flooding the sewer system.

Residents are especially proud of the 10 out of 80 acres devoted to edible landscaping, including community orchards, vineyards and garden plots for residents.

Many of the original homeowners and those who have bought homes since have been attracted to the passive solar features of the homes. Each home faces south with minimal east and west exposure to prevent overheating in summer. The houses are well-insulated and all were built with double-paned windows, which at the time of construction was unusual. The Design Review Committee makes sure solar rights are protected as people remodel or plant large trees.

The houses represent a range of experiments. Most have a form of thermal mass such as tile floors or water culverts that absorb winter sunlight and radiate the heat back into the room after the sun sets. Other homes have greenhouses or other passive systems to capture the winter sun’s heat and cool the home in the summer. During summer, simply opening windows all night allows the delta breeze to cool many homes.

Village Homes has a track record of choosing sustainable actions:
• They encourage homeowners to have vegetable gardens in the 3 acres devoted to garden plots. Both the gardening staff and those who have garden plots use organic gardening techniques.
• The pool is heated in spring and fall with solar panels. The same panels heat the Community Center in the winter.
• They continue to offer tours of Village Homes to interested parties who wish to see the passive solar homes, the layout of the community, or the edible landscaping.
• They have an internal website where residents can list items they wish to sell or give away. The office manager will also send out emails regarding items residents wish to give away. When residents remodel, they often put out an offer to residents if there will be roof tiles, interior tile or usable redwood available free. Many residents use freecycle so usable items do not go to waste.

Village Homes still has room for improvement, though. The Board hopes that joining the Cool Davis Initiative will spur individual homeowners to action. Meanwhile, the board used the Cool Davis interview as a chance to set some goals:
• They are looking for ways to conserve water by changing to more drought tolerant plantings, by adjusting the watering systems to use less water, by watering at non-peak times, and by exploring the idea of drilling a well.
• They want to make future Village Homes events closer to zero waste by asking residents to bring their own dishes and water canteens and by offering composting as well as recycling.
• They want to make rented events closer to zero waste with a checklist of steps for renters to follow. (Other groups in Cool Davis Initiative have such lists that can be used as models.)
• They are looking for a way to provide ventilation on the south side of the Community Center that faces the pool. The glass doors have always been locked shut because of pool liability, but the room gets uncomfortably hot without cross ventilation.
• Some residents have the idea of one or more shared electric vehicles for errands when a bicycle won’t suffice, i.e. a self-funded Zip-type car for those in VH who buy in.

The Board has taken some actions toward improving energy efficiency already. In the Community Center, the Village Homeowners’ Association has installed a very efficient, wood-burning stove for winter heat, and two ceiling fans for summer cooling.

The Board is also hoping Cool Davis will actually challenge Village Homes to overcome its complacency and take a more active stance. Many residents already participate in the Cool Davis festival as volunteers or attend Cool Davis events.

“Songs to Move the Earth” is an example of the rich collaboration between Cool Davis and its new partner, Village Homes. Sixty-five neighbors and guests gathered to share desserts and browse the Cool Davis display, before enjoying a multimedia tour of the last 70 years of environmental music by Lorraine Anderson, a writer and musician who herself lived in Village Homes for 15 years. Village Homes musicians added original, contemporary environmental songs including George Haver’s “How Big is Our Print?” Donations will support the drama “The Search for King Carbon” at the Cool Davis Festival on October 13.

Village Homes looks forward to more collaboration with Cool Davis and hopes to set an example for other homeowner associations even as it continues to improve its own carbon footprint. And Cool Davis is more than pleased to welcome the Village Homeowners’ Association as part of the growing coalition of community partners.

By Lynne Nittler, homeowner in Village Homes since 1977