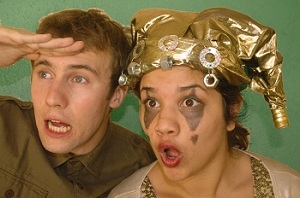 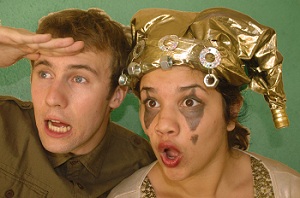 With a little bit of folly, a little bit of learning and a lot of laughs, Nature’s Theater returned to the Cool Davis Festival on Saturday, October 13th with a free theatrical performance for the whole family. The show is called The Search for King Carbon.

This is the third year Nature’s Theater has performed at the Festival.

The first two years they delighted full houses at the Veterans Memorial Theater. This year, their new show and the festival itself, moved to Central Park in Davis.

The audience at the Festival was in for a treat. They put together two types of shows, interactive outdoor walking stories, which they have performed for thousands of children throughout Yolo County, and their stage productions.

Every Nature’s Theater show contains an environmental theme. The Search for King Carbon is a stage production that entertains and informs its young audience about global warming. Audience members learn ways to reduce their carbon emissions from three different areas: energy, transportation, and consuming stuff. They achieve this with a healthy dose of humor, practical information, and audience participation.

A few kids are selected from the audience to help the Earth King find King Carbon and stop him from making so many CO2s. On their search, an array of wacky heroes help the kids wrestle secrets from a bunch of tricky CO2s. As one parent said after the show, “I loved how at the end the entire audience said the phrase, ‘This is our planet, of green and blue. What do we want? Less CO2!’ And it was loud!”

“I’ve done a lot of things with kids but when I do a Nature’s Theater story I really feel like the kids listen and I make a difference.” (Hope Raymond)

The cast includes young adults as well as children and youth between the ages of 8-21. Over the years, Nature’s Theater has developed a troupe of young actors who passionately share the environmental theme embedded in each show.

Hope Raymond, a Davis resident and frequent Nature’s Theater performer said, “I’ve done a lot of things with kids but when I do a Nature’s Theater story I really feel like the kids listen and I make a difference.”

Prior shows include Junky’s Last Stand, with a theme of learning to make healthy food choices, Glug Glug and the Water Boss, which explores water conservation issues and Animal Circle Club, with a message of kindness and caring for all.

Nature’s Theater currently has over twenty original stories in their repertoire. Nine stories are in final edits and when complete will be ready for distribution on-line. The books will also include step-by-step information for teenagers and adults on how to effectively lead a Nature’s Theater story.

Lyndsay Dawkins, co-founder of Nature’s Theater, believes it’s important to get the next generation of children excited about being outdoors. “Nature’s Theater engages kids through stories that plant seeds. And one day, our hope is all those seeds germinate into people who truly care about the plants, the animals, the Earth itself.”

The Search for King Carbon was performed at six elementary schools in five school districts in Yolo County. This was made possible by generous contributions from the Cool Davis Foundation, Yolo-Solano Air Quality Management District, Davis Farm to School and the Tuleyome.

Note to parents: Attending The Search for King Carbon just might convince your kids to turn off the lights.