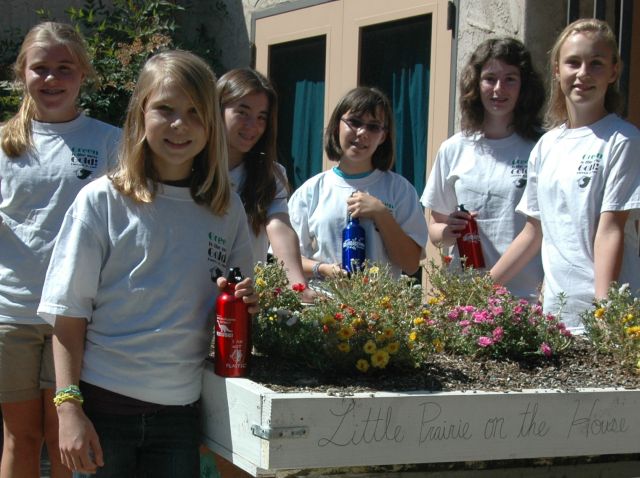 Linda A. Silverstein, a Green Team leader at the Emerson/Da Vinci Junior High campus, tells the story of how they dramatically reduced use of plastic bottles, held an inspiring ‘green screen’ film festival and cut their landfill trash by four.

Here in our wonderful little bubble of Davis it’s easy to take steps toward greening our schools, thanks to organizations like Davis Farm To School (DF2S).

DF2S works in conjunction with the Davis Joint Unified School District to hire parents and other adults interested in teaching students how to garden for fresh produce, how to compost and how to use the 3 R’s – Reduce, Reuse, and Recycle.

Most Davis Joint Unified School District campuses play host to “Green Teams” led by parent and teacher volunteers, and in some cases, students get involved as well.

During the past couple of years I have been involved as both a Green Team leader at the Emerson/Da Vinci Junior High campus and as the DavisRISE (Recycling Is Simply Elementary ) coordinator at Patwin Elementary School.

The Green Team at the Emerson/Da Vinci Junior High campus in West Davis has been involved in numerous efforts during the past few years. Campus initiatives have taken a multi-pronged approach including educating students, making systemic changes on campus, and enforcing the school district’s food waste standards.

During the 2010-2011 school year, Emerson/DaVinci’s Green Team had a cold filtered drinking water dispenser built into the wall of the indoor commons adjacent to the cafeteria. The goal was to provide students with fresh cold drinking water FOR FREE!

The only catch? Students would have to carry their own refillable water bottle. The obstacle? Not 10 feet away from the brand new water dispenser sat a full size vending machine filled with plastic water bottles distributed and sold by one of our nation’s largest soft drink companies.

Although each small plastic bottle cost $1, the students continued to purchase the bottled water in lieu of drinking the free water just a few feet away.

During the 2011-2012 school year the Emerson/DaVinci Green Team decided to try to solve this dilemma by having the water bottle vending machine removed. After a few months worth of meetings, emails and phone calls, the district’s Business Services office arranged for the soft drink company to remove the vending machine from campus.

Next we started to arm the students with stainless steel water bottles by selling them in the indoor commons at lunchtime. We sold the bottles at cost and reminded the students to use the water dispenser our Green Team predecessors had installed.

Why did we decide to dedicate so much time and energy to this one initiative?

We did so for numerous reasons. No one should waste money to buy bottles of water when there’s free drinking water being offered, and we wanted the students to start thinking that way.

Also, in our consumer society we create way too much plastic which takes a toll on the environment. Even when plastic bottles get recycled, the amount of water and energy required to produce or re-produce plastic, and the pollution created during the plastic process are extreme.

The process of re-producing metal that’s been recycled takes a lesser toll on the environment, so we also had the soft drink vending machine housed in the teachers’ lounge switched from plastic bottles to aluminum cans.

More Efforts in the Davis Schools – Great Examples that Could Translate Anywhere!

Last April on the Emerson/DaVinci campus we ran a “Green Screen” in the indoor commons during lunch for 5 days during Earth Week; We alternated playing 2 video loops containing several videos about topics such as littering, minimizing our use of plastic, choosing foods that are fresh and local, reusing everyday materials, and the Great Pacific Garbage Patch.

Our other efforts on the Emerson/DaVinci campus included: educating the teachers and staff on how to save ink and paper by setting the printers to eco-conscious settings, “greening” on-campus events by using reusable tableware and recycling and composting as much as possible, asking the district to fix leaky plumbing, purchasing and assembling a garden shed to store reusable project materials discarded by Da Vinci students, and assisting the campus DavisRISE coordinator with streamlining the food waste process at lunch time.

Most DJUSD campuses have a DavisRISE coordinator funded by a stipend who works in conjunction with Davis Farm To School at each location, as well as a garden coordinator. School gardens are used to educate and involve students in the growing of food, and some schools even grow enough produce to sell it back to the DJUSD main kitchen, so it can then be served in school lunches. DavisRISE coordinators are tasked with minimizing the amount of landfill-bound waste generated on campus, through recycling, composting, and generally educating students about the 3 R’s.

The Benefits of DWR  Commercial Waste Program.  Prior to this school year, we used a traditional composting system (no meat, dairy or paper) and school composting was a joint effort between the DavisRISE and Garden Coordinators. Other lunch waste receptacles included paper-cardboard recycling, metal and rigid plastic recycling, and landfill-bound waste. The 300+ students at Patwin Elementary used to fill approximately 2 landfill-bound garbage bags every day after lunch.

At the start of the 2012-2013 school year, DF2S (Davis Farm to School) working in conjunction with Davis Waste Removal, implemented an expanded food waste system. By switching from on-site traditional composting to commercial composting at the downtown Davis Waste Removal facility, each elementary school in the district can now include meat, dairy, napkins and paper towels, wax paper, and the white cardboard hot food trays in the compost.

We at Patwin now only fill up half of one landfill-bound garbage bag after lunch each day. Since we create less actual waste, Davis Waste Removal empties fewer garbage bins at each elementary school, and each site using this expanded food waste system is scheduled to save approximately $3,000 per year.

Davis Waste Removal and Davis Public Works were important supporters of the program during its first five years, both financially and in generous time spent creating the model. These two groups along with many volunteers were the backbone of the program before it was successfully taken on by DJUSD.

Other DavisRISE efforts at Patwin Elementary have included purchasing reusable tableware to replace the countless disposable items used throughout the year at class parties and monthly teacher luncheons.

I figure with around 14 classes, an average of 30 students per class and each class hosting 3 parties during the year, just by using the reusable tableware we can save approximately 1260 cups and 1260 plates from being disposed of each year. Add in the monthly teacher luncheons and the eco-savings really add up!

If you would like to share your creative ideas regarding how citizens can make Davis schools even greener, or if you would like to volunteer either at Patwin Elementary or Emerson/Da Vinci Junior High, please email caliboojoo@gmail.com.