Home > City of Davis > Who is the Coolest? Davis or Sacramento? 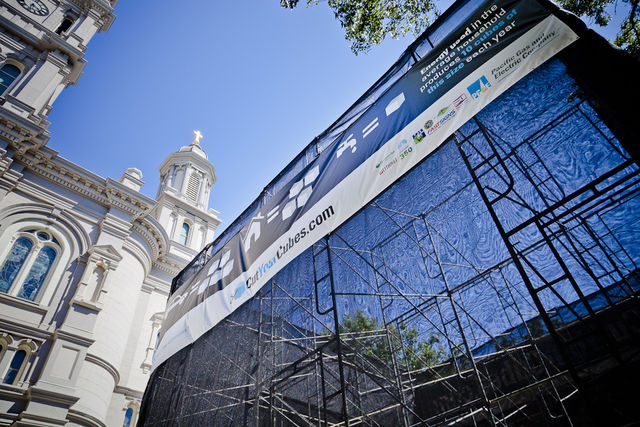 Who is the Coolest? Davis or Sacramento?

Davis’ competitive streak (!) reached new heights last month, as Sacramento and Davis battled it out for the title of Coolest Californian city in the state-wide city challenge to reduce carbon emissions.

Davis initially won the title in June – and a welcome $10,000 prize – after more than 250 households signed up.

However in July, Sacramento started to catch up registering the most households, and gaining lots of media coverage after unveiling a thirty-foot square cube made of scaffolding and covered with a black mesh, to visualize the significant volume of greenhouse gases generated by a typical four-person household in one year from vehicle emissions, household energy and water usage.

The Cool California challenge asks households to register online at www.cooldavis.org/challenge and to start tracking their household energy use and transportation. It is designed to be a fun way of trying out new things and experiment with household changes.  Just signing up can help Davis gain additional funding in the next stage of the competition.  Taking actions and changing habits means even more points for the community

The challenge also enables Davis to move closer towards the goal of 75% of Davis households engaged in significant greenhouse gas reductions by 2015, which is part of the City of Davis Climate Action and Adaptation Plan.

Good start, but Davis can do better

Though the start-up of the Cool California Challenge last April was a little rocky for participants to initially navigate (due to technical problems), Cool Davis organizers are encouraged by the dedication of these first 250 households.  “These people represent the first 1% of the Davis community now willing to commit publicly to their carbon reduction activities.”

HoweverAlan Pryor, a Cool Davis LiteHouse member and Treasurer for Cool Davis thinks Davis has a chance to do even better if everyone participates.  “Many, many more households in the community have worked for decades on energy conservation, transforming their transportation choices and changing their consumption patterns.  But if they are not signed up, then their efforts are not yet reflected in Davis’ totals.”

Planning for the future

Certainly Davis still has some way to go  to move from the average household footprint for Davis of 40 metric tons of C02/year to the sustainable footprint of 2 metric tons /year. Which is why Cool Davis is looking in 2012 to develop a serious strategy and powerful campaign to help us reach our goals. This will involve mobilising resources, developing a new staffed infrastructure and planning a more extensive campaign to begin next spring in the community.

Judy Moores, Cool Davis Foundation, President sees it like this.. “It will take all of us working together –changing our households, changing our habits and changing the way we conduct our lives to reach the Davis goal of carbon neutrality.  So the Cool Davis Foundation is actively expanding their board of directors and seeking additional funding matching these initial $10,000 dollars given as a prize by Cool California.  That way we can begin to help households make these changes.”

Chris Granger, a Cool Davis leader sees “the last few months as just the start-up of the Challenge– in the next phase (beginning in August and running through next March) the game will have more bells and whistles.  You’ll be able to invite friends, form groups and challenge each other to take actions reducing your carbon footprint.  Later we’ll be adding a regular raffle feature where your household points act like tickets to win prizes.”

“Many Davis residents have already accomplished a lot,” from the perspective of the city’s Sustainability Program Manager, Mitch Sears, “but now Davis is working on a more systematic response to prepare for our future.  The Cool California Challenge is one tool that can help us move forward more quickly.  Most people are not aware that like Davis, all cities around the state are planning their responses to climate change.

“With the resource of UC Davis next door and their research & efforts in sustainability, we have many opportunities to be a laboratory of community innovation.   What we learn here can help shape solutions for people and communities all over our state and our country.”