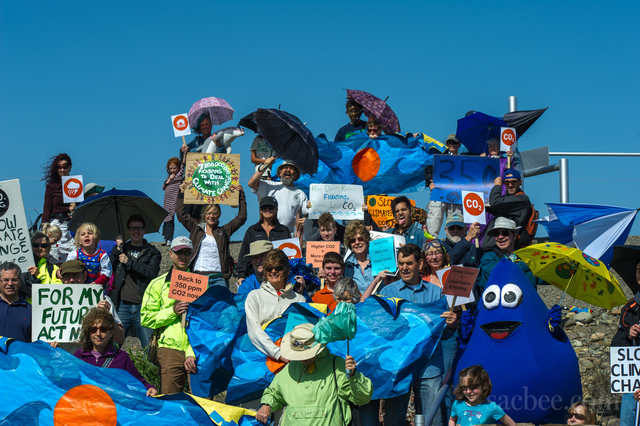 Davis proudly took part in a powerful and moving global event that US environmental journalist Bill McKibben called “one of the last best chances to educate our civilization about climate change.”

With thousands of communities worldwide, Davis joined Climate Impacts Day to draw attention to the impacts that are already taking place because of climate change, and to connect the dots between climate change and extreme weather.

Between 40 and 50 Davisites of all ages met in the Yolo Bypass Wildlife Area at the base of the levee this morning at 9:00 a.m. dressed in raingear with umbrellas and carrying signs such as “Don’t flood our future,” “Slow Climate Change Now,”  “Climate Change = More rain = failed levees = Flooding,” and many more. Rik Keller, a local professional photographer captured the event: see all the photos on his website: rikkeller.com

Two speakers addressed the crowd:  Dr. Howard Spero, chair of the Department of Geology, spoke of the serious threat of climate change in broad terms, and the need to reduce our Carbon dioxide levels in the atmosphere back to 350 parts per million.  Then Don Saylor, Yolo County Supervisor pointed out that we were standing at ground zero for our area at the levee and went on to discuss the imminent dangers we face with potential levee failure and plans to make improvements.

High winds ripped the three 8-foot long wave murals with bright orange dots in the center of each as participants moved up the levee to the top.  The murals were designed by and created under the guidance of  local muralist Danielle Fodor.

The Davis event was just one of thousands of events that took place on May 5 2012. It is worth visiting www.climatedots.org to see the moving and powerful testimony of how climate change is already affecting our planet and those of every creed and colour who are standing up and demanding action.

The Davis event was covered by lots of the local media including:

You can see a full photogallery at rikkeller.com and video clips of the event on youtube