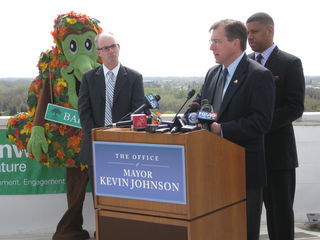 This edited article appeared in Sacramento Press and covers the launch on April 3 2012 of the Cool California challenge and the participation of Davis, Sacramento and Citrus Heights

Mayor Kevin Johnson spoke at his weekly press conference on Sacramento’s commitment to the Cool California Challenge and the 30,000 Trees in 30 Days campaign. Both of these commitments, he said, go toward his vision of turning Sacramento into “Emerald Valley,” the greenest region in the country.

The Cool California Challenge is a competition between cities in California. Residents of participating cities sign up online to track their carbon footprints. Signing up earns 100 points, and every energy-saving activity tracked earns additional points.

Johnson said that Sacramento needs 1,000 residents to pledge because he wants to win the challenge.

The mayor of Davis, Joe Krovoza, and the mayor of Citrus Heights, Jess Slowey, spoke at Johnson’s weekly press conference.The three cities are working together in the Cool California Challenge.

Krovoza said that Davis, Citrus Heights and Sacramento are going to lead the way in the challenge.

Slowey said, “One of the things we’ve always struggled with in Citrus Heights is how to engage the community.”

He said the city just recently went through a general plan update and put its greenhouse gas component in that plan, but that the plan didn’t excite people.

“This challenge will bring out necessary means to get folks involved,” Slowey said.

Johnson said that Sacramento doesn’t care who wins the 12-month Cool California Campaign but that, “we want to make sure northern California certainly has one of the top cities.”

The 30,000 Trees in 30 Days campaign began on March 7 and ends on Sunday. The campaign is in celebration of the Sacramento Tree Foundation’s 30th anniversary.

Sacramento residents can log onto the website to donate money, pledge to plant trees and get information about planting trees. Approximately 27,000 trees have been pledged so far.

PG&E donated $25,000 to the campaign to go toward the purchasing and planting of trees in Sacramento.

Jimmy Harris, a manager for PG&E, spoke at the press conference about PG&E’s commitment to the campaign.