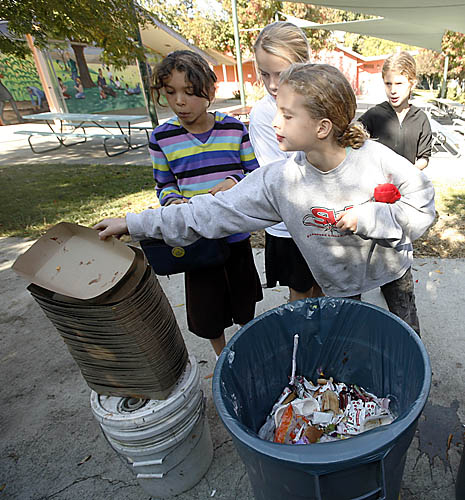 How one Davis school cut its trash by two-thirds

Ximena Jackson, Davis RISE Coordinator tells the inspiring story of how Cesar Chavez Elementary School reduced its waste from 320 gallons per week to around 100 gallons a week in the space of a few months.

As the Caesar Chavez Elementary School RISE Coordinator, I took on the challenge to introduce a milk/juice carton recycling program to reduce waste at our school site.

Within 5 weeks of the pilot program we were able to reduce our waste from two 32 gallon trash containers to half or one container during the lunch period. Seeing success so quickly, we looked for additional ways to reduce waste. With help from the district RISE coordinator and school custodian, we modified the program and began adding food scraps and paper towels for composting.

Today we are filling two 90 gallon containers with milk/juice cartons, food scraps, paper towels and food trays per week. These are 180 gallons of waste per week that are been composting instead of sent to the landfill. The trash has been reduced from two 32 gallon trash cans per day at lunch (320 gallons per week) to about 1⁄2 – 3⁄4 32 gallon trash can per lunch (80 – 120 gallons of trash per week).

The DWR sent us a survey for the pilot program. These are the comments that I made for them:

“The most compelling reasons for schools/businesses are the environmental and, financial benefits. The monthly fee could be the same as another regular trash pick-up, but you know that you are reducing the amount of trash sent to the landfills. This is an important message that you can advertise to your customers, and customers in Davis who care about these kind of things.”

We hope to continue the program and add additional schools. Although it might take some personnel training at the beginning, our experience at CCE shows the benefits surpassed the challenges!

At the beginning of the 2010-2011 school year I set a goal to reduce from two trash cans to one in a two-year period. Through the partnership between the DJUSD, DWR and DF2S, we have done it in 3 months.

I need to highlight the active participation of our students in this success.The students feel very proud that they are contributing to REDUCE the amount of trash sent to the landfill; that the food scraps are being composted REUSING the resources.

I cannot finish without mentioning the incredible recycle team at our site: Principal Denise Beck, who supported every initiative that helps the program; Custodian Rigo Mayorga, who has pro posed suggestions and helped with logistics, and Lunch Supervisors Leticia Rocha and Ana Topete, who not only take care of the regular yard duty tasks at lunch time, but also constantly remind the students about recycling. Rigo Mayorga was granted the Custodian Award on 2009 for his support to the Recycle Program. Leticia Rocha and Ana Topete were granted the GROW Award on 2008 and 2009 for their support to the Recycle Program.