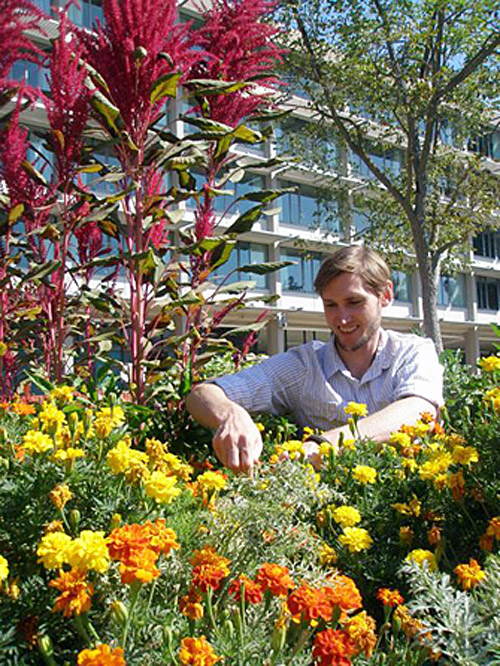 Mailes’ journey to health and sustainability

Fifth year UC Davis Senior, Jeff Mailes’ experience with cancer at a young age led him to explore producing organic good food and to promoting sustainability to his fellow students.

Jeff grew up in Woodland Hills, an L.A. suburban community in the San Fernando Valley.  Jeff says that one of the good things about his youth was getting to spend parts of each summer with relatives on a farm in Pennsylvania, where he had the freedom to explore nature.  Then as a teenager, Jeff suffered a major health crisis in his life, and it changed him.

Jeff says, “After being diagnosed with and defeating cancer during my high school years, I have devoted myself to developing a new lifestyle which will prevent others and me from going through the trauma I was personally exposed to as a teen.  I am focuses on the promotion of local organic produce and people power – in stark contrast to my fast-food upbringing at the site of America’s first worst nuclear meltdown, the San Fernando Valley.”

After three years in Community College and flirting with the idea of majoring in film, Jeff decided to take a different path.  He came to Davis, declared a major in Environmental Resource Science, and joined the Sigma Nu Fraternity, The Student Farm, and Davis F.A.R.M.  He credits these groups, and the people in them, as helping him lead others and him towards a more healthy and sustainable lifestyle.

This past year at Sigma Nu, he installed an incentive based recycle system and succeeded in diverting over 643+ pounds of California Redemption Value recyclables from a landfill and started the Greek system’s first composting program.  In addition, he has helped make all their food service events zero waste and thanks the Whole Earth Festival and  Campus Center for the Environment for allowing the continued use of their reusable dinnerware and cutlery.

And not content with these changes, he worked to get the position of “Sustainability Chair” written into the Sigma NU by-laws to ensure that the group would continue to uphold eco-friendly values in years to come.

Jeff notes, that the newly installed Sigma Nu garden yielded its first zucchini, crookneck squash, and tomatoes this summer, and the new vermiculture bin has been constructed out of a broken refrigerator.  He says that his hope is that his actions may lead to the transformation of his fraternity and the other fraternities at UCD, from organizations which harbor a culture of consumption, into groups modeled after Davis F.A.R.M., which is not only a hub for the community, but also produces food for itself and the less fortunate.  At the F.A.R.M., all those who help get to take home a share of the produce, but at least half the food produced goes to support a low income/no income housing community in Davis.  Jeff not only works on F.A.R.M., he has also become a Board Member.

For the new school year, in addition to working as an Intern taking care of the Segundo Resident Garden, he is working with others to change Sigma Nu’s disposable “red cup” culture to a “reusable cup” and to ask the UC Davis student body to increase their fees by $3.50 to support innovative student projects that would create student jobs and reduce their campus’ impact on the environment.  As his passion for sustainable agriculture has grown, Jeff has dreams of creating an edible-landscaping business.

In October 2011, Jeff Mailes was awarded Cool Davis Eco Hero Award at the Festival. Amazed to be chosen as an Eco Hero, Jeff said,  “I have just been doing what I would do any way.”  But as his friends say of him as a Sigma Nu member, “Jeff is not your ordinary greek.”