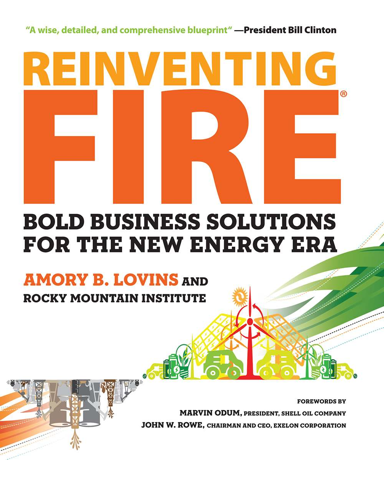 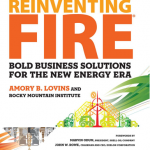 Renowned physicist Amory Lovins will be speaking at UC Davis at 12pm on February 28 on the themes of his new book “Reinventing Fire” which outlines a detailed roadmap for eliminating coal and oil use by 2050. Don’t miss this chance to hear this scientist and advisor to more than 20 heads of state named by Time magazine as one of the top 100 most influential people in the world.

Lovins will discuss the main themes of his new book “Reinventing Fire,” a detailed roadmap for eliminating U.S. oil and coal use by 2050, led by business for profit.

Please share this invitation with others who may enjoy attending.

Seating is limited, so please register by Thursday, February 23rd.

Physicist Amory Lovins is Chairman and Chief Scientist of Rocky Mountain Institute and Chairman Emeritus of Fiberforge Corporation. His wide-ranging innovations in energy, security, environment, and development have been recognized by the Blue Planet, Volvo, Onassis, Nissan, Shingo, and Mitchell Prizes, MacArthur and Ashoka Fellowships, the Benjamin Franklin and Happold Medals, 11 honorary doctorates, honorary membership of the American Institute of Architects, F! ellowship of the Royal Society of Arts, Foreign Membership of the Royal Swedish Academy of Engineering Sciences, and the Heinz, Lindbergh, Right Livelihood, National Design, and World Technology Awards.

He advises governments and major firms worldwide on advanced energy and resource efficiency, has briefed 20 heads of state, and has led the technical redesign of more than $30 billion worth of industrial facilities in 29 sectors to achieve very large energy savings at typically lower capital cost. A Harvard and Oxford dropout, he has published 29 books and hundreds of papers and has taught at eight universities, most recently as a 2007 visiting professor in Stanford University’s School of Engineering.

“My friend Amory Lovins knows that the most important question of the twenty-first century is the “how” question-how we turn good ideas into working solutions. Reinventing Fire is a wise, detailed, and comprehensive blueprint for gathering the best existing technologies for energy use and putting them to work right now to create jobs, end our dependence on climate-changing fossil fuels, and unleash the enormous economic potential of the coming energy revolution.”  – President Bill Clinton

“Amory Lovins and his team of extraordinary professionals provide an analytically sound, detailed, compelling plan for transforming our national use of energy – and for saving $5 trillion in the process! Reinventing Fire is a towering work, a page-turning tour de force of compelling wisdom that deserves a permanent place on the desk – nay, in the mind – of whoever holds the chair in the Oval Office.”  – Robert C. McFarlane, national security advisor to President Reagan; co-founder and co-chair of the United States Energy Security Council

We are so grateful to our Big Day of Giving Matching Fund donors! Early birds get the match! GIVE thru midnight MAY 6! www.bigdayofgiving.org/cooldavis #BDOG2021 ... See MoreSee Less

Our matching fund is $15K. There's still time to help us reach our goal tonight and all day tomorrow! GIVE thru midnight MAY 6! https://www.bigdayofgiving.org/cooldavis #BDOG2021

These early birds are helping us take flight! GIVE thru midnight MAY 6! https://www.bigdayofgiving.org/cooldavis #BDOG2021

More generous donors! Any amount will help us reach our goal! GIVE thru midnight MAY 6! https://www.bigdayofgiving.org/cooldavis #BDOG2021

We are so grateful to our Big Day of Giving Matching Fund donors! Early birds get the match! GIVE thru midnight MAY 6! https://www.bigdayofgiving.org/cooldavis #BDOG2021

Tomorrow is the "big" day, y'all! Please give generously! http://www.bigdayofgiving.org/cooldavis #BDOG2021