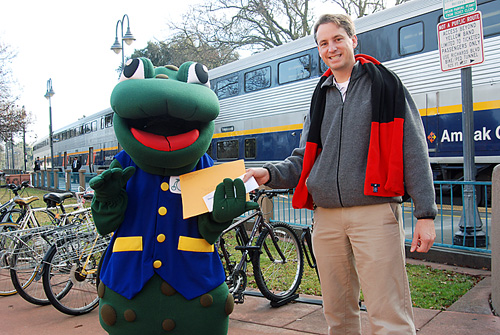 Davis aims to be the coolest city in California

Mirror, mirror, on the wall, which is the coolest city in all of fair California?

As of Wednesday, Davis is in the running for the title of Coolest California City when it became one of the first six cities to apply for the Cool California Challenge.

As a result, the city and the Cool Davis Initiative will be awarded $1,000 in seed money to launch the campaign, with the possibility of even bigger prizes on the horizon.

All that is needed now is to put a mirror up to the community to see where it stands now — establish a sustainability baseline — and every resident can participate, whether they’ve been a longtime advocate or are new to the ideas of energy conservation.

Mayor Joe Krovoza observes, “We are the first city in the U.S. to adopt a goal of carbon neutrality by 2050. Yet we can’t reach for this goal until we all measure our energy use, and begin testing the options that will work for each of us.

“This challenge is a fantastic opportunity for us to see how we are doing, and use that information to chart the most efficient path to carbon neutrality.

“This challenge is a fantastic opportunity for us to see how we are doing, and use that information to chart the most efficient path to carbon neutrality.

“This is a new beginning for Davis,” he continued. “I know our community’s networks are up to this task, from school classes to nonprofits, from businesses to our faith-based communities to our committed UC Davis students.”

Chris Jones, a Davis resident, is the lead researcher at the Renewable and Alternative Energy Laboratory at UC Berkeley. He will direct the yearlong Cool California Challenge project, which is funded by the California Air Resources Board.

Once applications close at the end of February, the cities that applied will compete for three months to see which can get the most households signed up online.

The challenge will focus on household energy efficiency and transportation. Participants will log in to record their energy use and transportation information and share their greenhouse gas reduction accomplishments.

Just by signing up, each resident earns points for Davis in the challenge.

Each of the first three months, the city with the most points earned by residents logging on will be chosen as a finalist. Recently, Davisites showed their voting power in a nationwide Christmas decoration contest. Enough Davis residents voted online every day for a week to send a Davis home to the top of the list, winning $100,000 for local schools.

Residents now have the chance to make their vote count for the environment. Each household that logs in, no matter what their current efforts at sustainability may be, can help Davis compete in the Cool California Challenge. Each of three finalist cities will earn $10,000 in support funds to continue the challenge.

Households may begin logging on in April. For more information, go to www.coolcalifornia.org/community-challenge.

For those who continue the challenge, taking time to log in periodically and record efforts to reduce greenhouse gas emissions will help the city reach the goals of its Climate Action Plan to engage 75 percent of Davis households in a carbon reduction program by 2015. This will set Davis on a path to achieve its ultimate goal of carbon neutrality by 2050.

Just how cool is Davis? Check in your mirror. And watch for more information as Davis takes on the Cool California Challenge.

We are so grateful to our Big Day of Giving Matching Fund donors! Early birds get the match! GIVE thru midnight MAY 6! www.bigdayofgiving.org/cooldavis #BDOG2021 ... See MoreSee Less

Our matching fund is $15K. There's still time to help us reach our goal tonight and all day tomorrow! GIVE thru midnight MAY 6! https://www.bigdayofgiving.org/cooldavis #BDOG2021

These early birds are helping us take flight! GIVE thru midnight MAY 6! https://www.bigdayofgiving.org/cooldavis #BDOG2021

More generous donors! Any amount will help us reach our goal! GIVE thru midnight MAY 6! https://www.bigdayofgiving.org/cooldavis #BDOG2021

We are so grateful to our Big Day of Giving Matching Fund donors! Early birds get the match! GIVE thru midnight MAY 6! https://www.bigdayofgiving.org/cooldavis #BDOG2021

Tomorrow is the "big" day, y'all! Please give generously! http://www.bigdayofgiving.org/cooldavis #BDOG2021