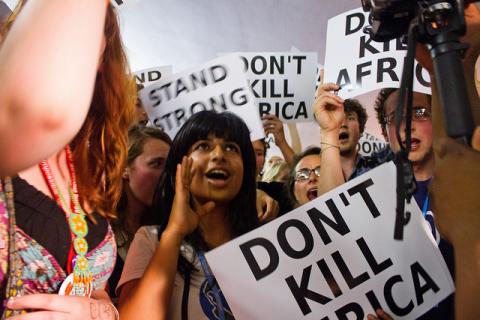 “You’ve been negotiating all my life,” a Maine student shouted out to a room packed full of climate experts and experienced diplomats at the United Nations climate conference earlier this month. “In that time, you’ve failed to meet pledges, you’ve missed targets, and you’ve broken promises.”

At the U.N. climate negotiations I attended in South Africa, there was no shortage of expertise and knowledge about global warming, but it was the passionate words of a student, Anjali Appadurai, that resonated most with me.

It was the third summit I have participated in but the 17th — a lifetime for Anjali — since the 1992 U.N. Earth Summit in Rio de Janeiro when the first climate change accord was agreed upon. Following that action, a number of industrialized countries — except, notably, the United States — agreed to binding emissions cuts of 5 percent while all countries worldwide committed to take some action.

Yet despite the promises, global emissions of heat-trapping gases have risen by 36 percent and the world has warmed by almost half a degree since 1992. By any measure, this has been a spectacular failure by the world’s political leaders on an issue that will have grave consequences for our children and grandchildren.

Sadly, the conference this year in Durban, South Africa, was no different. The United States — blocked by congressional intransigence and White House timidity — came with empty hands. Other nations like Canada and Japan openly retreated from their previous commitments, while emerging economies such as China and India did their best to put off any binding commitments indefinitely.

Behind the scenes, thousands of corporate lobbyists applied pressure to stop any deal that would dent their profits. The result was an agreement, in essence, just to carry on negotiating with vague talk of a binding deal by 2020. This is despite warnings by scientists that we must act this decade in lowering emissions if we are to have even a 50 percent chance of keeping global warming to less than 2 degrees.

It would not be surprising if I came back depressed at this clear inability by the world’s political leaders to tackle climate change, but I have instead come back energized. For too long, the world’s attention has been focused on appealing to politicians to solve the problem. Many people looked to the U.N. because it was obvious that an ambitious global deal would be the best way to deliver effective change rapidly.

Yet the result as we have seen is decades of inaction and a public that has been disempowered and disengaged. I believe we need to take back power from politicians and prove that it is possible to kick the fossil fuel habit and create vibrant communities in the process.

We have seen through the Occupy movement, which has transformed the public debate on inequality and corporate power, that local actions can make a huge difference. Across the country, environmental and community groups working together already have managed to stop the building of hundreds of coal power plants. The result — at least in part — has been the first decline in carbon emissions in the U.S. since the mid-1980s.

One of the largest civil disobedience actions in recent decades this year has managed to halt the approval of the Keystone XL pipeline that would transport highly polluting oil tarsands from Canada to the U.S. Gulf Coast.

Here in Davis and California, we have the opportunity and the power to fundamentally change how we source and use energy. We can — and are — creating a more resilient, healthy community in the process. The city of Davis already has committed itself to cutting carbon emissions by 15 percent by 2015 — and the community-led Cool Davis Initiative has been leading the way in showing households effective ways to cut both carbon and make financial savings, too. (Check out www.cooldavis.org/take-action/quick-wins.)

I believe we need to be even more ambitious. Why can’t a smart, engaged community like Davis have its own community-controlled renewable energy power station? Surely we can find innovative ways to finance an expansion of public transport, major energy refits of our housing, or to give incentives and loans for electric car use?

With the next U.N. negotiations set to meet in Qatar — one of the countries with the highest emissions per capita in the world — it is incumbent on communities like Davis to show that there is an alternative. As Appadurai put it so eloquently in her speech in Durban: “Real ambition (on climate change) … is dismissed as radical, deemed not politically possible. … Long-term thinking is not radical. What’s radical is to completely alter the planet’s climate, to betray the future of my generation, and to condemn millions to death by climate change. …

“(Nelson) Mandela said, ‘It always seems impossible, until it’s done.’ She ended her speech with the shout ‘Get it done.’ ”

Let’s heed that call, and show that while our political leaders are failing us, leadership can come instead from communities like Davis who are determined to “get it done.” The future is in our hands.

— Nick Buxton of Davis was at the U.N. climate talks with the Transnational Institute. He is an active member of the Cool Davis Initiative (www.cooldavis.org).