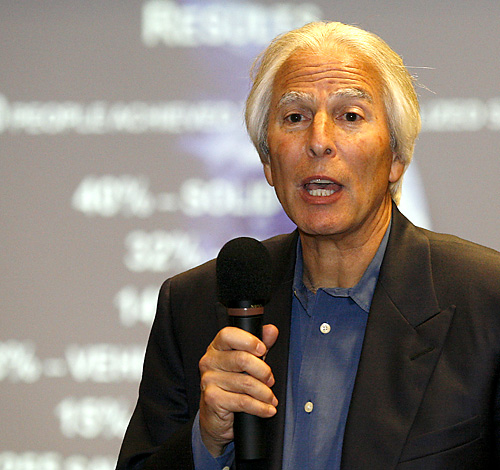 Davis could show the world how to save the environment

By the end of the year, Davis could be selected as one of six cities that can save the world.

Or at least to act as a model on just how to save it.

David Gershon, former White House and United Nations adviser, has embarked on a tour to invite select cities to apply for the Cool City Challenge, a program he believes will demonstrate to the world what it needs to do to become sustainable and ultimately a carbon-neutral planet.
Gershon, author of “The Low Carbon Diet and Social Change 2.0,” addressed City Council members, city commissioners and the public Tuesday to explain what the challenge is and why he has chosen Davis to possibly act as one of the participating cities.

“I think you have huge opportunities to lead the world, literally,” Gershon said in his opening remarks. “I’m not just saying that. You’re the first city in America to have a carbon-neutral plan — not just a plan, but have it be adopted by the City Council — and when we tell cities around the country and around the world what you’re doing, they are inspired.”

The challenge takes three cities from the United States and three from Brazil to serve collectively as a model. Each city will adopt strategies that Gershon has tested successfully around the country to begin their efforts to become carbon-neutral.

Those strategies include the low carbon diet, which many Davis residents already have implemented into their daily lives, but that is not the essential part of the process.

Much like Gerald Braun has discovered while leading the efforts for UC Davis’ West Village Energy Initiative, Gershon’s strategy hinges on community engagement.

Mitch Sears, the city’s sustainability program manager, explained that it will take more than the city’s commissions and action teams to get Davis to where it needs to be environmentally.

“We could not reach our goals without engaging the community in a real and meaningful way,” Sears said. “It’s going to be up to the community to take ownership of this issue and to work with the city to be able to find solutions as we go forward.”

The first goal for the cities participating in the challenge is to reduce their carbon footprint by 25 percent in three years.

“That’s what we see as the end game for what a cool community can achieve,” Gershon said. ”2050 is a great number, but that’s a long ways away.”

If Davis is selected, the Cool Davis Initiative, which co-sponsored Gershon’s talk with the city of Davis, will play a big role in the project.

However, the initiative alone cannot push the entire city to carbon neutrality. To achieve what Gershon has planned for Davis, the whole community must get involved.

“Over 150 families have already participated in the low-carbon diet, but it’s going to take much, much more than that,” said Mayor Joe Krovoza.

“We have a goal of 75 percent of the households in Davis really taking a hard look at their carbon footprint.”

The project will launch in June at Rio +20, the event that marks the 20th anniversary of the 1992 United Nations Conference on Environment and Development.

The cities chosen to participate in the challenge, however, will be selected in a matter of weeks.

The Cool City Challenge will announce the results of the selected cities’ efforts to reduce their carbon footprints by 25 percent at the 2016 Olympic Games in Rio de Janeiro.

Gershon hopes the large platform that the Olympics provide will help inspire other cities take part in the initiative.

A rebroadcast of Gershon’s talk can be seen on Comcast Channel 16 over the next few weeks. It also can be seen online at www.cityofdavis.org.