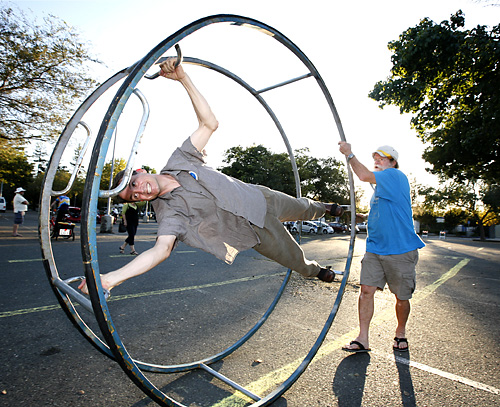 By Chloe Kim. Cross-posted from Davis Enterprise, who did fantastic coverage of the whole festival. See full gallery of photos on Enterprise website

Highlights included a bike rodeo and bike safety checks, the National Plug-In Electric Vehicle Day event, a solar cooker booth, a cooking demonstration and a vast array of exhibits in the multipurpose room.

At the bike rodeo, an obstacle course was drawn in chalk in the parking lot adjacent to the center.

“Kids don’t think to follow the rules because they don’t know what they are,” said Jim Watson of Davis Bicycles!, a local bike advocacy group.

That’s what the bike rodeo aimed to change.

The course took the form of a bike lane, with various obstacles such as piles of grass clippings and stop signs for kids to follow. The goal was to teach children how to look back, signal, switch lanes and stop safely.

Robb Davis of Davis Bicycles! coached kids through the course, teaching them how to bike safely and follow the law while yelling encouraging comments.

Nearby, the Davis Bike Collective offered free help to anyone who wanted to check the safety of their bikes themselves.

“We check the brakes, the tires,” volunteer Kent Thompson said. “A lot of times people don’t have their brakes working, or they don’t have any reflectors or lights. Most of these problems are really easy to fix.”

“It’s really empowering” for people to learn to fix their own bike, Thompson said. “They’re able to do something they weren’t able to do before. It’s really exciting to see them do that.”

“Davis is fertile ground for something like this. We think we can point the way to the future.” Eugen Dunlap

Also in the parking lot was the National Plug-In Electric Vehicle Day event. Rows of electric vehicles were out for display, and at the far end, people could test-drive the new Mitsubishi Imive, which won’t be on the market until December, as well as electric motorbikes.

“People are happy and interested,” Eugen Dunlap said. “Davis is fertile ground for something like this. We think we can point the way to the future.”

People were especially interested in the possibility of using solar-generated energy to power vehicles.

“That really seems to get people interested. They see the utility of installing solar panels for both their house and their car,” said UC Davis psychology professor Dick Coss, who owns a Chevrolet Volt. “When you look at the cost of transportation, it’s not even comparable to gasoline. I charge my car off my roof.”

On the sidewalk were various booths, including a solar cooker demonstration by longtime solar cook Maria Gonzalez.

Gonzalez’s 20-year-old handmade solar cooker was in the process of baking bread rolls.

The key to successful solar cooking, according to Gonzalez, is time.

“Solar cooking is very easy, but you have to be patient,” she said. “It’s just what happens when you park your car on the street. It gets very hot. You can bake simple rolls, make some vegetables, cook eggs. Just like any other kind of cooking, some things are simple and others hard. You can be adventurous.”

Gonzalez said the only food inadvisable to cook using solar power is meat, as it requires higher temperatures than most solar cookers can generate.

“I encourage people to try it. It’s a good way to use the sun’s energy that comes every day for free,” she said.

Inside the multipurpose room, visitors could do everything from exploring greener ways to run their homes to buying reusable grocery bags.

At the Cool California booth, community members calculated their carbon footprints and filled out checklists of carbon dioxide-reducing habits.

Reducing carbon dioxide emissions needs to be “a collective event, rather than an individual one.” Chris Jones, Cool California

“It’s a statewide campaign,” said Chris Jones, who works with Cool California. “We’re getting people to tell us what makes them a cool Californian.

The goal, according to Jones, is to make reducing carbon dioxide emissions “a collective event, rather than an individual one.”

Other activities included demonstrations in the Club Room, workshops in the Game Room, an opportunity to try out Whymcycles in the parking lot, children’s activities in the courtyard, nature-themed theater performances and a raffle for prizes.

What’s on your plate?

Earlier in the day, a panel of food experts discussed the topic “Practical Ways to Eat Healthy, Spend Less and Reduce Your Food Print” in the theater.

Volunteer Mary Parton succinctly summed up the mood of the festival: ”I think people are having a blast.”