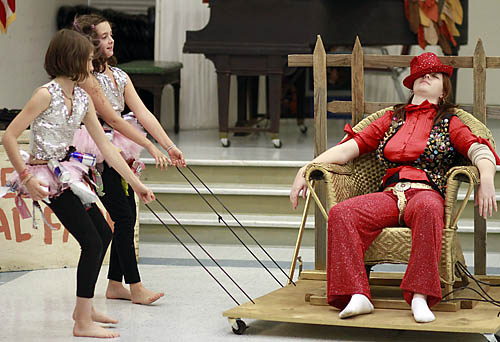 Nature’s Theater returns to the Cool Davis Festival on Sunday with a whole new environmental-themed play for children.

“Junky’s Last Stand,” written and directed by husband-and-wife team Jeff Falyn and Lyndsay Dawkins, will be performed at 2:30 p.m. in the Veterans’ Memorial Theatre. The performance is free and no tickets are necessary, but since last year’s performance of “King Carbon” nearly filled the theater, Falyn urges folks to get there early.

Like last year’s show, this year’s performance features a cast of local youth and teens in an original play written by the duo.

“But this year’s play is a lot bigger than last year’s,” Dawkins said.

The cast has doubled in size and features five original songs. It’s also written specifically for the stage, a twist for the duo, who normally write and perform outdoor walking stories and last year tinkered with their play, “King Carbon,” to make it work onstage. But as with the walking stories, “Junky” will be interactive, involving audience participation.

The play focuses on “Junky the junk food master” and his mission to convert all kids to junk food slaves.

“It’s really entertaining,” Dawkins promises, “but we leave at least three key things for kids to to walk away with.”

We leave at least three key things for kids to to walk away with: issues related to sodas and sweets, the humane treatment of animals and the use of pesticides.

Those include issues related to sodas and sweets, the humane treatment of animals and the use of pesticides. All fit in with this year’s Cool Davis theme, “Celebrating Healthy Pathways to a Low Carbon Life.”

Already, Dawkins and Falyn have seen an impact on their young performers, who they said have taken greater note of what they are eating.

They’ve also seen what acting opportunities can do for the cast.

“One of our goals is to look at each little performer and ask, ‘What is their glass ceiling?’ and help them punch through it,” Dawkins said.

One performer that the duo are particularly excited about is Utsav Bhargava, 13, who wrote the accompaniments to all five songs castmembers will perform.

Because Bhargava has a conflict on Sunday and won’t be able to attend, the entire cast will perform in an encore at Birch Lane Elementary School on Wednesday, Oct. 19, with Bhargava performing as well.

Falyn and Dawkins have been immersing children in the natural world for six years now, largely through their Nature’s Theater program which took place in Stebbins Cold Canyon near Lake Berryessa.

That program has ended, but the duo have plans in the works to continue Nature’s Theater at a variety of local sites beginning in the spring. They also plan to make use of talented teens in the area.

“We’ll train them, give them assistance and ideas and directions,” Dawkins said, and the teens, in turn, will lead the performances.

Because Nature’s Theater has become popular entertainment at birthday parties, the duo said teens will even be able to earn a little money while they’re at it.

It’s a great way to reach two age groups, the pair noted, because the teens pick up leadership and business skills and learn how to teach younger children, while learning a few things about the environment themselves.