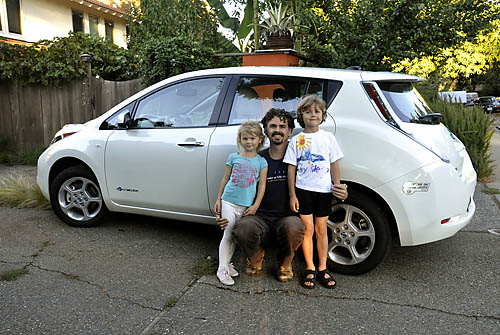 Check out electric vehicles at Friday cruise and Sunday festival

These sounds of a traditional automobile show will be noticeably absent in the upcoming Cool Davis Cruise About and the plug-in electric vehicle show-and-tells coming to Davis this weekend.

With increasing gas prices and the need to find alternative fuel sources, electric vehicles (EVs) and plug-in hybrid electric vehicles (PHEVs) are making their way to becoming a viable alternative. The Chevy Volt and Nissan Leaf are becoming more visible in today’s culture and more models are expected to emerge within the next year.
“Every major car company and at least a dozen start-ups have announced work on new plug-in vehicles,” says Plug in America, a national group looking to accelerate the shift to plug-in vehicles powered by clean, affordable, domestic electricity.

“Electric cars are very reliable. No oil changes, no tune-ups,” the group continues. “The best way to reduce carbon emissions is to utilize the even cleaner, greener, more renewable grid to power transportation.”

Davis residents will have the opportunity to watch and ask questions about these cars at two Cool Davis Initiative events.

Friday features the Cool Davis Cruise About, a plug-in vehicle cruise through downtown Davis. It will end in a show-and-tell at the Farmers Market pavilion in Central Park, Fourth and C streets.

The Cool Davis Cruise About will happen concurrently with the Second Friday Art About celebrating “Low Carbon Pathways to an ArtFull Life,” as well as the UC Davis Homecoming Pajamarino. All events Friday night will encourage attendees to walk, bike or take alternative transportation to cowntown Davis.

These cars also will be featured at the 2011 Cool Davis Festival from 2 to 5:30 p.m. Sunday at the Veterans’ Memorial Center, 203 E. 14th St. The parking lot will feature a plug-in vehicle show-and-tell in coordination with National Plug-In Vehicle Day, a nationwide observance drawing global attention to the environmental, economic and other benefits of plug-in electric vehicles.

Featured at these events will be the Nissan Leaf, Chevy Volt, ZAP Xebra and converted electric cars. Davis will be one of the first cities in the US to showcase the new Mitsubishi i car where four vehicles will be available to test drive. Attendees will be able to ask questions and learn more about these cars from the car owners.

Andrew Frank, a Volt owner and an expert on plug-in hybrid vehicles, will attend the festival. He has worked on the development of these types of vehicles for more than 25 years and is considered as the father of the modern plug-in vehicles.

“The plug-in hybrid is a potential solution because it leads directly to the creation of more renewable energy from solar and wind,” Frank said. “This will (be a) benefit not only transportation but for the entire society.”

— Manny Rin is a senior in environmental policy and planning at UC Davis and a leader of Make Davis Cool, the UCD student arm of the Cool Davis Initiative. He is the coordinator of the Cool Davis Cruise About.