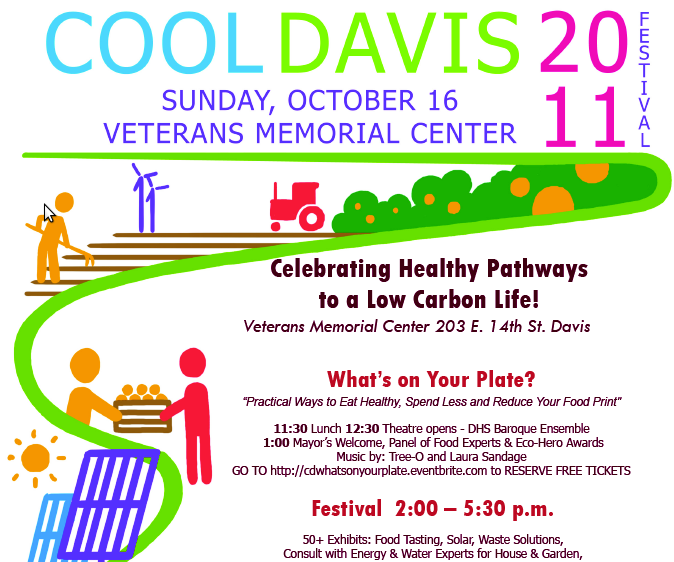 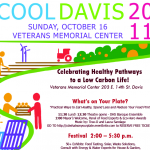 The Cool Davis Festival – which is rapidly approaching – now features as the finale in a long weekend of special events on sustainability. These include film festivals, a plug-in vehicle cruise and a Service Day of Action. Don’t miss out!

October 13 (Thursday) – Wild and Scenic Environmental Film Festival: On Thursday, , the Cool Davis Initiative with co-sponsors Sierra Club and Tuleyome presents award-winning films at the Richard Brunelle Theater at Davis High School. Doors open at 6:30 p.m.; the films begin at 7 p.m. Tickets are $10 at http://2011daviswildandscenicfilmfestival.eventbrite.com and at the door (if still available.)

October 14 (Friday) – Cool Davis Cruise About – Low Carbon Pathways to an ArtFull Life 4:30 – 8:00 The Plug-in vehicle Cruise through downtown Davis begins at the G Street parking lot at 4:30-5:30 p.m. and ends at Central Park Pavilions on C Street between 3rd & 4th at 6:30 p.m. for Show & Tell from 6:30-7:30 p.m. Everyone is encouraged to walk, bike or take alternative transportation! The Cruise About is sponsored in collaboration with the: Davis Downtown Business Association, 2nd Friday ArtAbout and the UC Davis Student Alumni Association Pajamarino.

October 14 (Friday) – Davis Bicycles! Film Festival at 7:00 in the Brunelle Theater at Davis High School at 315 W. 14th Street. Davis Bicycles! hosts an annual film festival with a mix of entertaining and educational films about bicycling.  Ticket sales are at the door with $5 suggested donation per person.  A raffle follows the intermission. The net proceeds from ticket sales will benefit the Davis Bicycles! School Program.