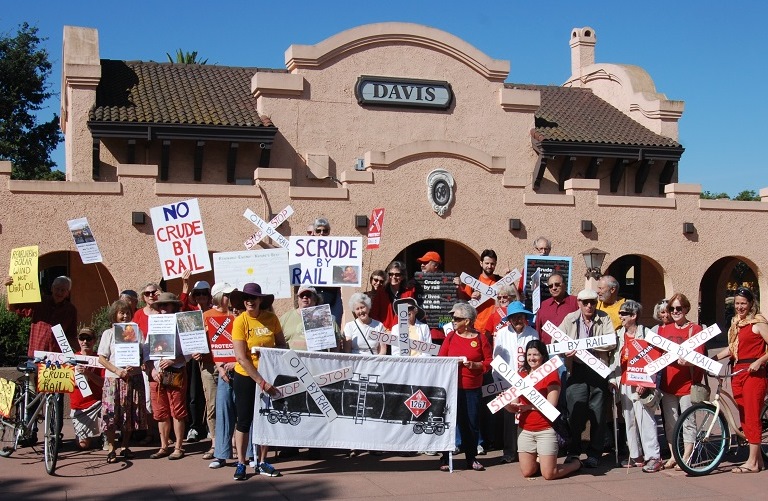 Over eighty Davis residents showed up on Saturday, July 11, in fiery red, yellow, and orange shirts to awaken the town to the danger of oil trains transporting highly flammable Bakken crude and toxic tar sands crude oil to refineries in Benicia and San Luis Obispo.  Dozens met at the train station and carried signs and a six-foot banner of a 1232 oil tank car through downtown Davis to Central Park, a route entirely within the one mile blast zone should there be an accident.

At the park, the marchers enjoyed a round of feisty songs led by the Raging Grannies of Sacramento.

Councilman Lucas Frerichs explained the city efforts to alert the region to the danger by bringing the issue to SACOG (Sacramento Area Council of Governments: 22 cities and 6 counties).  Their staff counsel composed a thorough and compelling written critique letter to the City of Benicia Planning Commission which SACOG adopted unanimously minus one vote by a substitute representative.  The letter was sent to the Benicia Planning Commission as public commentary for the EIR.

Senator Lois Wolk related several pieces of legislation she worked on to make the oil trains at least safer and more responsible since the issue surfaced at the end of 2012, and urged us to send letters of support for a number of pending bills, including her current bill requiring two crew on every train hauling hazardous material, including especially oil trains!

Finally, Yolo Superintendent Jim Provenza explained waste water injection, referring to a recently released report.  Damien Luzzo announced a CA Ban on Fracking initiative and referred folks to a table to be the first to sign it.

Many folks also signed the letter urging Assemblyman Bill Dodd to support two key CA climate bills that have already passed the senate and are now making their way through the Assembly.  SB32 is a continuation of the earlier climate bill that is driving all the work toward reducing our carbon emissions in CA currently.  It proposes lowering our emissions 80% below1990 levels by 2050.  The second bill, SB350, Is Senate Pro Tem President’s bill covering the promises of Governor Brown’s State of the State Address in February: 50% reduction in car emissions, 50% greater building efficiency, and 50% more solar and wind sourced electricity.  Assemblyman Dodd is currently undecided whether to vote for these two landmark bills!

The Davis action Stop Oil Trains action was one of many during the Week of Oil Train Action.  There’s a collage of photographs from across the country here. https://www.flickr.com/photos/forestethics/sets/72157655110369339

Here’s a report from Forest Ethics who organized all the Stop Oil Train events across the U.S. and Canada.

What a week.  In total, more than 5,000 people participated in 100 events during this year’s #StopOilTrains Week of Action – amounting to the largest protest against oil trains in history. Across the US and Canada, communities took to the streets, held memorial vigils, blockaded the tracks, hosted educational events, hung banners, canvassed neighborhoods, and spoke out at public hearings. This effort – led by grassroots leaders and communities most impacted by oil train transport – sent ripples across North America.

Highlights from the week of action are too numerous to count. National press coverage included pieces in MSNBC, Democracy Now, EcoWatch, The Hill, AP, & VICE – alongside dozens upon dozens of local print, TV, and radio pieces.

In Lac-Mégantic, the week started with a beautiful, bold, and somber march that drew hundreds of people to the tracks. The week continued with a banner hang and guerrilla projection actions in California, powerful infrastructure blockades in New York and Oregon, creative rallies in Albany, Baltimore, Milwaukee, Richmond (VA), Minneapolis, and DC – just to name a few. Then this weekend, action picked up with a jazz funeral procession in Philadelphia and a die-in in Seattle. On Saturday, thousands attended coordinated protests across California – including rallies that drew hundreds each in San Luis Obispo, Richmond, Los Angeles and San Jose – to call on decision makers across the state to reject new oil train infrastructure proposals and shut down existing operations. There are countless more to name, and every action had an impact, from gatherings of 5 to 500. No matter where or how you participated, you were a part of something extraordinary.

We’ve come a long way, but we know we can’t and won’t stop here – across North America, big oil will continue to push for new extreme oil infrastructure despite its impact on community health, safety, and the climate. Our movement will continue to grow and fight for our communities and our climate – so thank you for making the 2015 Stop Oil Trains Week of Action a powerful step along the way.

Stay tuned for more as we await the hearing for the revised EIR for the San Luis Obispo refinery, and the release of the revised Valero project EIR on August 31 with a 45-day public window for written response.

Contact Lynne at lnittler@sbcglobal.net to be added to the oil train alerts listserve, or watch for news at www.Yolanoclimateaction.org  for updates.

July 11 vigil and protest
SUPPORT US