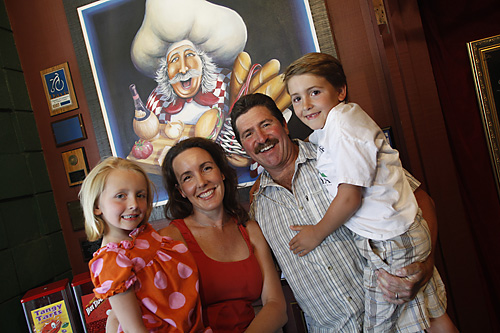 Find out how one Davis working mom is tackling food waste and climate change.For Shar Katz, owner of Davis-based Caffe Italia, starting a family marked the turning point in her thinking seriously about how to make her business more sustainable. “Ultimately, I am trying to use our business as a way to push through change for the better. For our kids and our community as a whole.”

Her thinking soon led her to look at the often hidden problems of waste that restaurants produce. ” The restaurant industry uses a lot of energy, and produces a lot of waste. But today, there are a lot of innovative ways to reduce waste, and help Mother Earth. There is always room for improvement. Many of these improvements are costly, but some can save money, which is a big deal for business during any economy,” says the energetic and passionate mom of two.

At the time, the City of Davis was putting considerable effort into teaching residents to compost in their backyard. Shar thought, “Why don’t we get a program going for commercial food waste? It seemed to me that the City of Davis could make an impact in reducing our carbon footprint if we businesses partnered together with the City and Davis Waste Removal to get such a program in the works.” Some estimates indicate that roughly half of restaurant garbage is potentially compostable so it was clear that a community scheme could make a significant difference.

Davis Enterprise columnist, John Mott-Smith Well explained why composting is important for tackling climate change; “Food waste that goes to the nation’s landfills is, by and large, broken down without oxygen and produces methane, a greenhouse gas 21 times as potent as carbon dioxide. A well-managed compost pile, on the other hand, is turned often to encourage high heat and quick decomposition, and does not produce much methane.” He noted that a recent study in Europe found that spreading compost on 20 percent of agricultural land in the European Union could sequester enough carbon to account for nearly 10 percent of the EU\’s greenhouse gas reduction goals.

Implementing a business composting scheme wouldn’t happen without lots of persuasion and persistence. So over the past three years, Shar showed her commitment to making a difference as she dove into the waste stream and began to learn how to make a Commercial Food Waste Diversion Pro-gram happen. Fast forward to early Spring of 2010, the timing was right, and Shar began again to make many phone calls and successfully brought together the City of Davis Public Works and Davis Waste Removal to initiate the development of a Commercial Food Waste Diversion program.

Finally in May 2011, Davis Waste Removal and the City of Davis launched a pilot composting scheme that will initially run through to December 2011. Its success now depends on other Davis businesses joining and supporting the pilot scheme.

For Shar, the journey to this point has been as fulfilling as the success so far, “I have made so many great connections with many incredible folks who, like me, really want this to happen. Including the Cool Davis Initiative, the Davis Farmer’s Market, and many others. The support of this mission by many is very inspiring.”